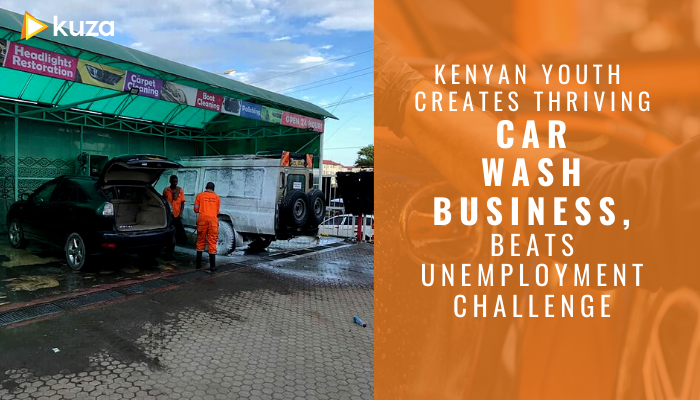 Every year, at least 30,000 fresh graduates enter job hunting mission yet companies are laying off employees due to what they term unfavourable conditions.
To beat unemployment, Mohammed Ali a Diploma in Business Administration graduate from Don Bosco institute is earning a whooping Sh130,000 per month from automobile cleaning.

He says the idea of automobile cleaning came to him in 2002 after working as a labourer in one of the car wash within Moyale town for two years.

“After my graduation, I searched for a white-collar job but I did not get one. So, I was employed as a labourer in a car wash within Moyale town where I worked for two years,” he said.
He invested Sh64,000 he got from working as a labourer in other car wash centres to start his own automobile cleaning which mainly focused on vehicles and carpets.

He spent Sh18,000 to buy a carwash machine, Sh21,000 on one vacuum cleaner Sh1,600 on the water which cost Sh10 a bucket of 20 litres and the rest he used other small equipment such as scrubbing brush and detergents such as soap and shampoo.

Soon the business picked up and he decides to open another branch in Taita Taveta then another in Naivasha along Maimahiyu road in 2006.

“The journey has never been easy because for this business to reach this far, I had to attend training in Spain, China and Dubai to know how car wash business can be improved,” said Ali.
Today the business has grown since he opened the businesses headquartered in Nairobi’s Fedha area in 2017 where he has introduced other services such as carpet cleaning, car interior upholstery and furniture cleaning among others.

He has since started offering all these services in all the company’s branches with increased investment of Sh10m which he used to buy high-quality modern machines and equipment such as three-phase pressure, hot water steam, buffing and vacuum cleaning machines among others.

Ali says these machines have made his life easy as he uses the same machines to offer different cleaning services.

“With this competitive market I had to incorporate both carpet and car wash business so as to cut on costs and maximize on profits,” says Ali who has founded Diamond Brite car wash and carpet cleaning centre in Nairobi.
The entrepreneur now has four branches across the country where he has created 20 youths in all the branches and hopes to open other branches soon. 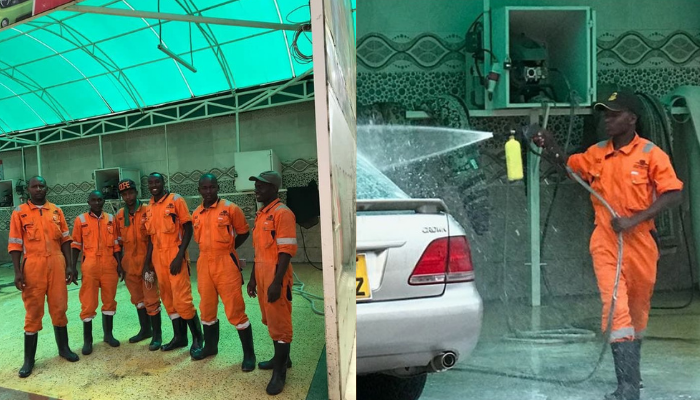 He says he cleans approximately 1500 cars per month where the minimum price for a car is Sh200 earning him around 300,000 gross income per month.
After all, deductions which include paying his staffs, electricity and water bills, detergents among other costs, he remains with a profit of Ksh130,000 every month.

According to a September 2002 study report by International Carwash Association (ICA) on Water Use in the Professional Car Wash Industry, machines such as high-pressure water rinse machine, a high-pressure sprayer and an automated nozzle machine can be used to clean cars, carpets and furniture.

“My customers are my main marketers as they recommend Diamond Brite to potential customers and together we grow.”

Ali says he has constructed underground tanks and backup generators so that at no particular time will any of the services fail to be available.
Another fact making car wash business more profitable and fast expanding industry is the increasing number of vehicles bought in the country as over 7500 new vehicles are introduced on Kenyan roads every month.
Latest data from the Kenya National Bureau of Statistics (KNBS) shows that new registration of motor vehicles increased by 12.0 per cent from 91,071 units in 2017 to 102,036 units in 2018. This shows that there has been a significant increase in the number of local car owners.

“It is obvious that almost everyone is driving nowadays and therein lies a potential business,” said Ali.

To supplement his earnings, he offers other services such as night parking and restaurant to bolster the profit margins.

He advised other youths to take up every opportunity that may come their way regardless of how learned they are.