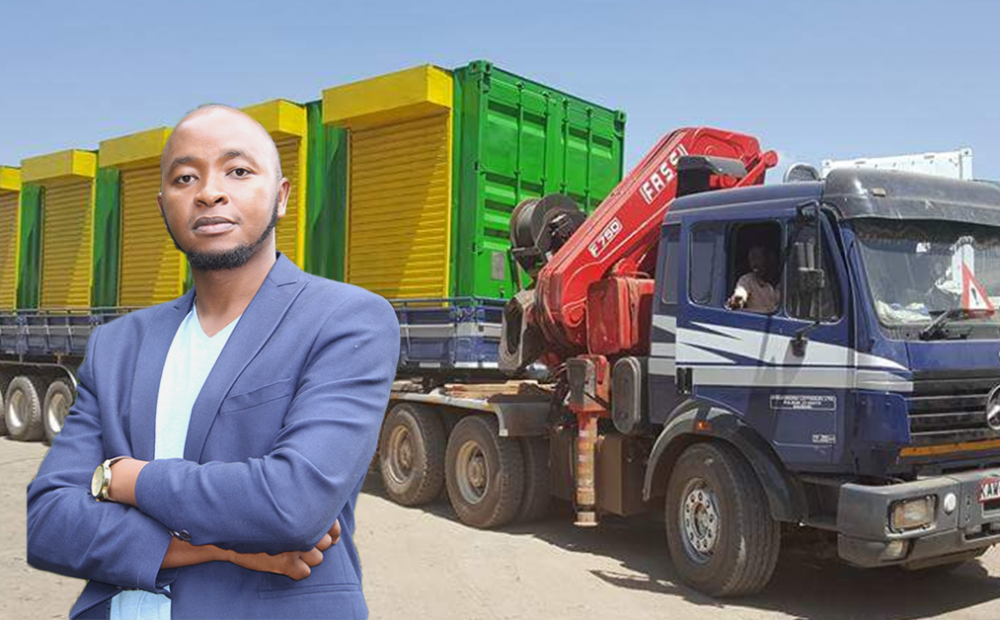 The first time I heard of this young man was in my local church. Owing to shortage of space in the church compound, the church management had ordered for a fabricated container which would work as an extra storage area and office for the women leader.

A story was told of a young man who had found his star out of converting shipping containers into affordable housing. At first the story didn’t impress me so much because it sounded like just any other hustle out there. This was until the NTV N-Soko Property show aired it; and being an avid viewer of the program, I had no choice but to sit down and watch.

That is how I met one Moses Ndura (not physically though). A young man with a bushy but neatly trimmed beard in his late twenties. At an age where most of his agemates were still struggling to make headwind in their white collar-jobs, Moses seemed to have taken a different path. And his decision seemed to be paying him back, handsomely. Being the curious type, I felt I needed to find out more about him.

What inspired him to walk on the path least trodden? How did he raise capital to build what looked like a well to do facility at such a young age? The problem however, is I did not have a way to contact him – I badly needed to build a rapport with him but I did not know how to go about it.

So finally, after almost two years of trying, I was able to contact him through a colleague and that’s how we arranged for this interview. What surprised me is that he was so humble and approachable. He actually agreed to drive all the way from his office in Industrial Area Nairobi to Kuza Biashara Innovation Centre just to talk to us.

As you can imagine, I was very eager to hear (or at least see) what secret potion this man was using to power his dreams.

Moses finished his undergraduate training in 2012 and fortunately for him he was able to secure an internship almost immediately after that. That opportunity alone gave him a chance to travel to different parts of Kenya and learn a thing or two about digital media (by then digital media was not as popular as it is today).

Unfortunately the internship came to an end in December that year and the young man was once again out in the cold struggling to make ends meet. Within no time he was thrown out of his rented house because he could not afford to pay for it. Because he could hardly afford the basics, he was forced to travel back to his rural area in Kiambu in the outskirts of Nairobi.

He resorted to helping his family back in the farm given that his folks were heavily reliant on subsistence farming. Much as he wanted to raise funds for matatu fare to Nairobi for his job-search missions, his family could only offer him a roof over his head and some food.

After spending several months in the village, Moses decided to register a business name. The process involved going to Sheria House in Nairobi to fill up some manual forms. He made this decision even though he neither had capital nor a business idea in the first place.

It was more like making a shot in the dark. It cost him Ksh2,500. But in so doing, he happened to discover a potential business idea.

“I figured I could start registering business names for other people back in the village at a small fee,” says Moses, a father of one.

“My bedroom became my office area. I even borrowed a laptop from my rural friend, which I used to kick-start my operations,” recalls the young man who now co-owns what is probably one of Kenya’s fastest growing SMEs.

Using the money raised from his new-found business, he was now able to raise enough money for matatu fare from his home to Nairobi every day. Soon, his job hunting mission was on course.

Then one day he landed a job as a salesman for a company called KopoKopo which used to popularize Safaricom’s Lipa Na Mpesa product. His payment was purely on commission. Knowing he had no other option, he decided to put his best foot forward, working at no pay for almost three months. When the contract ended, he was paid a lumpsum of Ksh130,000.

He put this money to good use by purchasing a second-hand laptop worth Ksh30,000 and renting out a shared office space in town at a cost of Ksh8,000 at Ngengi House in Nairobi. This time round he wanted to set up a digital marketing agency – whereby he would approach small business owners and convince them that he could actually market them using Facebook.

“I would help them create and maintain Facebook pages at a cost of Ksh2,500 per month,” adds Moses who reckons that the internship he undertook after college played a role in helping him conceptualize this idea.

Because of the cheap fees he was charging, his only way to sustain his business was by finding as many customers as possible. He discovered that this was indeed a tough call. So one day as he was busy chasing for more opportunities, he was approached by one client who had one special request.

With each empty container (40 Feet) going for as much as Ksh300,000, Moses figured that he could combine his sales and digital skills to take on the deal. And so besides doing the usual Facebook marketing for other clients, he set out to market the containers as well.

In just a few months he discovered that the container business was actually outperforming his other venture. Moreover, there were so many other digital marketing companies being set up and it was becoming increasingly difficult to maintain clients.

“What I would struggle to make in one month in my other business is what I was now making weekly in the container business,” Moses recalls.

So using all the savings he had managed to set aside, he went in full-throttle into the container business bringing on board the person who gave him the idea as a co-founder alongside two other colleagues. And besides just selling empty containers they decided to take it a notch higher by actually fabricating those containers for their clients.

This being a value added service meant that they could make a lot more per sale. They even ventured into building residential houses using containers, of which a one bedroom house goes for Ksh850,000 which is 40 per cent cheaper than a normal house.

That’s how Containers World Kenya, a company with an estimated annual turnover of over Ksh500 million, was born.

Today, they create employment for over 100 people. The business has expanded to Rwanda, Uganda, South Sudan as well as Tanzania. They have served quite a number clients from the UNHCR, KENHA, IEBC, Kenya Defence Forces (KDF) to small shop owners looking for stalls. Their offices located in along Rangwe road in Nairobi have become a bee-hive of activity.

Looking back, Moses admits that it has not been an easy journey especially given the fact that this is a relatively new idea in Kenya and many people are yet to embrace alternative building technologies.

At barely 30 years of age, Moses Ndura acknowledges that there are immense financial challenges in the country – making it difficult for young people to start their businesses. To overcome this challenge, Moses advices young people to start small, with whatever they have, provided they maintain a forward-looking approach to everything.

“I did not have to borrow money from my relatives to start, I simply discovered small opportunities around me which I harnessed in order to build onto my bigger ideas,” sums up Moses who provides mentorship to upcoming entrepreneurs when called upon.

Indeed, our take-away from this interview is that you don’t need to have a bank account full of cash in order to venture out from your comfort zone. Had Moses Ndura settled down in his rural area of Kiambu, he probably would still be there surviving on illicit alcohol and blaming his parents for not helping him pursue his dreams.

So what’s your excuse? Get up, identify opportunities around you and make a difference.