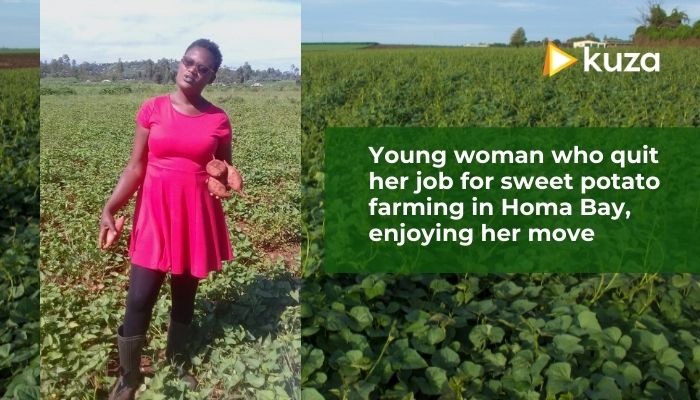 Jael Ochanji is one of the few youths who have made an unpopular decision among the young people- to leave her job and move from the city to a rural home just to grow sweet potato, a step she never regrets.

The 39 years old mother of two was working for milk powerhouse, Brookside Dairy Limited as a sales representative in Nairobi, a job which earned her Sh50,000 a month.

After working for about 10 years, in 2015 she decided to resign and got involved in sweet potato brokerage in Nairobi’s Wakulima Market.

She would work in connection with her mother who arranged for the tubers from their rural home in Kabondo, Homa Bay County and send them to her in the city. 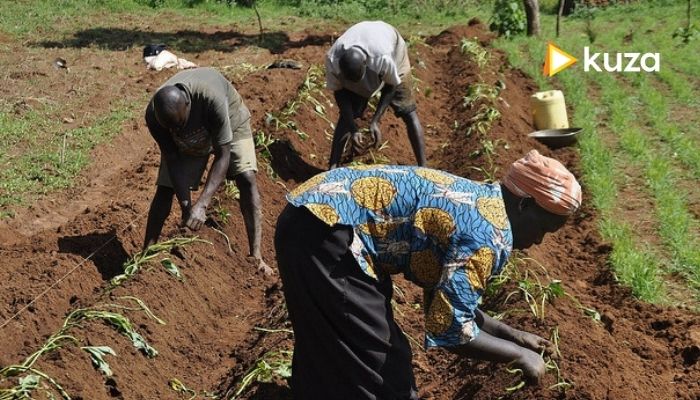 “Sweet potatoes do well in our rural home but farmers just rely on open-air markets in the village which do not have enough buyers.  My work in the city, therefore, involved looking for the market as mum collects the produce from growers and we arrange for transport,” said Jael.

For two years, the young lady was able to connect with many buyers including Uchumi Supermarket where she had won a supply tender.

Unfortunately, when her mother got ill in 2017 and could not do much work, she decided to go back to the village and to get involved in the serious production of both white and the much-cherished orange-fleshed sweet potatoes.

“As much as I had to source the produce from other farmers, producing it myself seemed more reliable and profitable so that I do not disappoint my customers in the city,” she said. 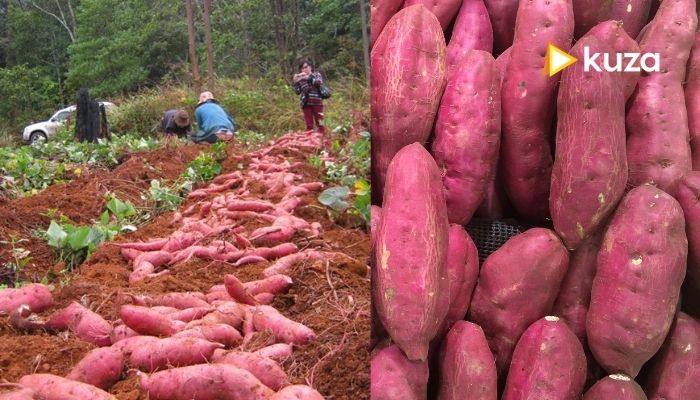 She used some of her savings to lease more farms and today she has 20 acres of family land and 35 other acres that are leased for crop production.

Jael has mastered crop production saying that since the white variety takes three months to mature while the orange-fleshed takes five months, she has to spread her planting schedule to ensure steady harvesting throughout the year.

As most farms in the area are still fertile, she only uses manure to grow the potatoes since most consumers today prefer organically produced foods.

“Kabondo is well known for fertile soil as the area is at the foot of Kisii highlands and besides we receive rainfall almost throughout the year making our products all year round,” said Jael.

Sweet potatoes have a short maturity period of 3-7 months and because of their short duration, it is very strategic for addressing food insecurity.

However, according to Jael, most of the crops consumed locally are imported from either Uganda or Tanzania as local farmers who are majorly smallholders cannot produce enough especially during dry seasons.

“Fortunately, Kenyan consumers love our home-grown yellow and white sweet potatoes for food because they are tasty, rich in nutrients and they do not become soggy when cooked like other varieties,” said Jael. 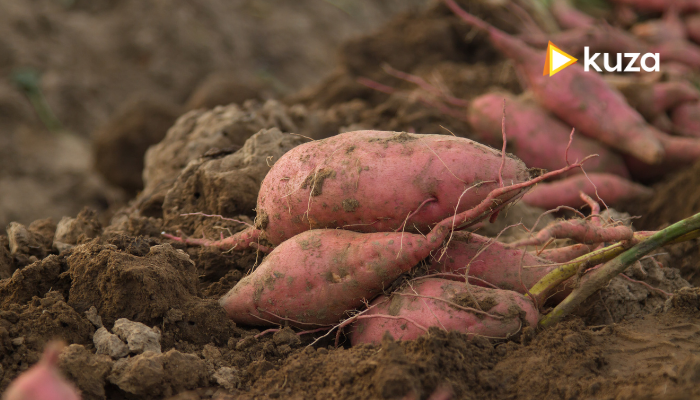 Today, she transports over 80 80kg sacks of sweet potato every week to Wakulima Market which is her main selling point since Uchumi stopped buying due to its sorry economic state.

She sells a bag at Sh3,500 (minimum price) but during high demand, the price can shoot up to Sh7,000 a bag against Sh1,500 in rural markets since almost every home has some sweet potato farm.

She spends a total of Sh18,000 in planting, weeding and harvesting. Hiring casual labourers for packing the produce in tracks costs her Sh5,000 while transporting a sack costs her Sh500.

The agro-entrepreneur who has since come up with her company also sells an average of seven bags of sweet potato vines at Sh1,500 each per week to farmers and livestock feed processors from every part of the country.

“I can now cater for my family needs besides running other projects as part of future investments,” said Jael.

She plans to put up a sweet potato processing plant to process different products and enable her and other farmers from the region to access direct market to their produce.