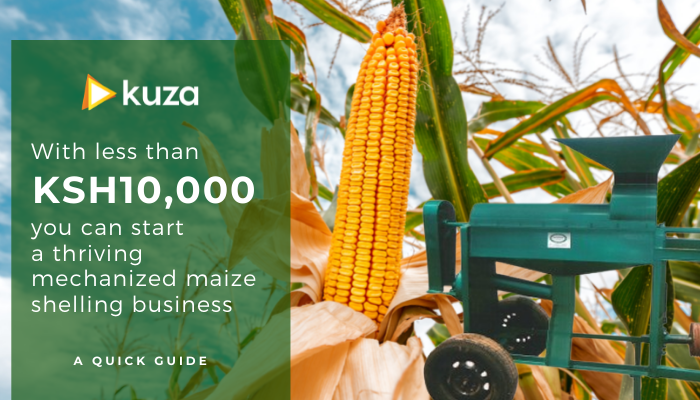 As a youth, you have been longing to get into maize farming but afraid of the tedious planting, weeding and harvesting work, this is your chance to participate in this rewarding venture, make a living and even create employment for others by evolving in mechanized maize shelling business.

This is one of the businesses in Kenya that you can never go wrong since maize is the main staple food crop in the country grew by at least 85 per cent of smallholder farmers who still physically remove the maize from cobs.

According to research dubbed ‘maize production, challenges and experience of smallholder farmers in East Africa by the International Maize and Wheat Improvement Center (CIMMYT), the physical removal of maize grains from cobs is a burdening, tedious, time-wasting and costly exercise that the farmers would be willing to abolish should there be a less expensive option.

And you can provide this option. Though there are different types of maize shelling machines such as electric and diesel-powered, for a start, you can go for a manually operated one which costs Sh8,500 and will not incur other costs on fuel or electricity.

After buying the machine, maybe what you will need is transport to your location which will depend on the distance and since it is manually operated and mobile you will not need much technical training on how to handle it.

The manual maize sheller is fitted with two wheels hence easy to move it to the working place hence no further transport costs incurred.

The machine is compact, efficient and comes in both mobile and stationary versions with a capacity of shelling from 50 to 100 90kg bags of maize per day.

Given the work involves inserting 30 pieces of maize in the equipment and rotating by hand shelling the pieces one after another and separating grains from the comb then sliding the shelled maize into a container before repeating the entire exercise for the rest of the maize, this can be tiring hence the chance to employ one or two people to help.

You can also lease the machine to a farmer who wants to cut down the service costs and charge at a subsidized rate depending on the number of bags shelled.

However, you may not have to limit yourself to the manual sheller. If your pocket allows you can get a diesel sheller at Sh50,000 with a capacity of shelling between 100 and 150 90kg bags of maize grains in a day.

Currently, Kenya is approaching maize harvesting season with some parts like the western region already have the crop matured with harvesting beginning towards the end of July until early September.

The high season for North Rift, popularly known as the breadbasket of the country due to its high maize production begins towards the end of the year.

The machines come in handy from the month of November all the way to February as some farmers usually store maize in cobs opting to have them shelled once the dry months set in.

This is, therefore, the best time for investing in the business getting yourself ready before the season begins as you will also have to market your service early enough.