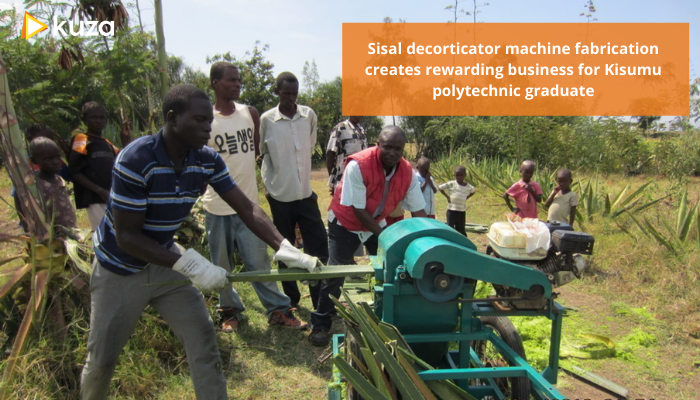 Every year various technical and vocational institutions churn out thousands of graduates who end up fighting for the limited job spaces available in the market.

According to the latest stats, as of 2019 Kenya counted 430.6 thousand students enrolled in Technical and Vocational Education Training (TVET), nearly 3x more than in 2013 when the initiative was established meaning as many as of the number graduate from such training centres yearly resulting to a surge in already shrank job market.

It is because of this that some of these graduates have decided to utilize their acquired skills to venture into making simple machines that can be used to process competitive products for income generation.

One such graduates is Alex Odundo who is a polytechnic graduate from Kisumu County.

For the last seven years, Odundo has made and sold over 100 sisal fibre decorticator machines which strips out the fibrous strands hence bringing back the sisal farming among over 10, 000 farmers in Kisumu County and other parts of Kenya.

Sisal farming has been neglected by many farmers over other crops such as sugarcane, tobacco, tea and coffee among other cash crops according to Alex Odundo who is an engineer by profession.

“Over the years many farmers who used to grow sisal have abandoned the crop. The few sisal grown nowadays are just found along land boundaries for demarcation purposes and not commercially grown,” said Odundo. 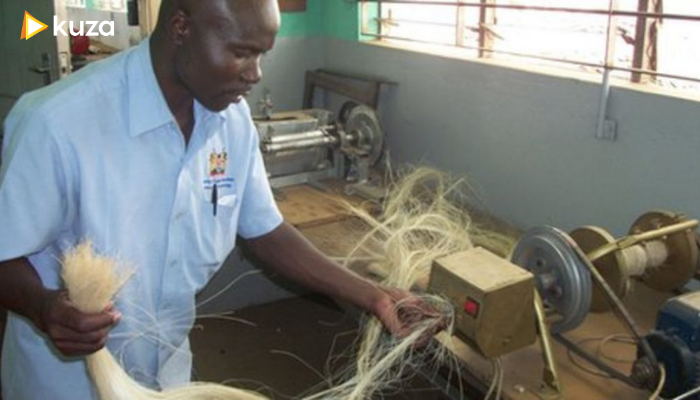 In his workshop-Olex Techno Enterprise based in Kisumu town he buys spare parts including the machine engines, assemble them into a complete operation machine ready for the market.

Odundo has been able to reach more farmers because most of them form groups of about 10 to 15 members buy one machine which can serve them well.

“One machine can serve about ten families in a given area so interested farmers form groups and buy one machine which they can share among themselves,” he said.

Farmers place orders for a machine of their choice then the machine is delivered to them at half the cost of the whole transport meaning the workshop share a half the transport cost though some customers prefer coming to the workshop to pick the machines themselves.

“We deliver our products to the customers at a half the transport cost to wherever they are. However, some customers who would like to have a demo on how the machines work before they buy, come to the workshop and leave with their products upon purchase,” said Odundo.

His machines ranges from Sh80, 000 to Sh200, 000 depending on the capacity. He has been able to sell the machines even to other countries such as Tanzania, Rwanda, Madagascar, Somaliland, and Nigeria among others. 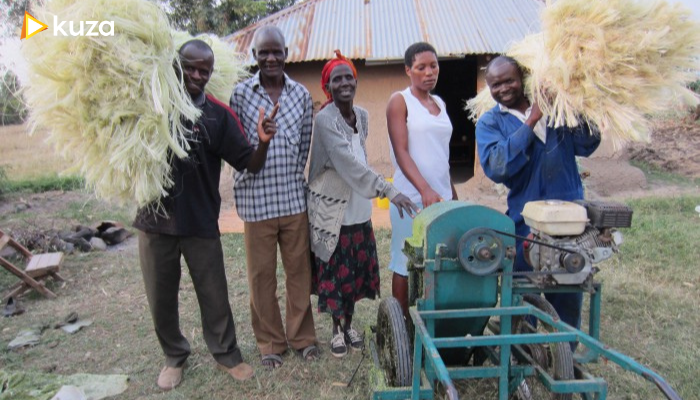 “We do deliver our products in a span of one week after payments especially to our customers who order from out of the country,” said Odundo.

The decorticator machines which can also be used to extract banana fibres is a business which has seen Odundo employ seven in his workshop, five others in the field while there are the rest who are occasionally contacted to help demonstrate to farmers how the machines work in case of deliveries.

Additionally, the entrepreneur is also making a twine spinning machine and a cord spooler which are used together with the decorticator machine to multiply the value of a raw sisal leaf in Kenya 20-fold.

The workshop is currently working on gender friendly decorticator machines as the current ones are not easy to run by women said Odundo.