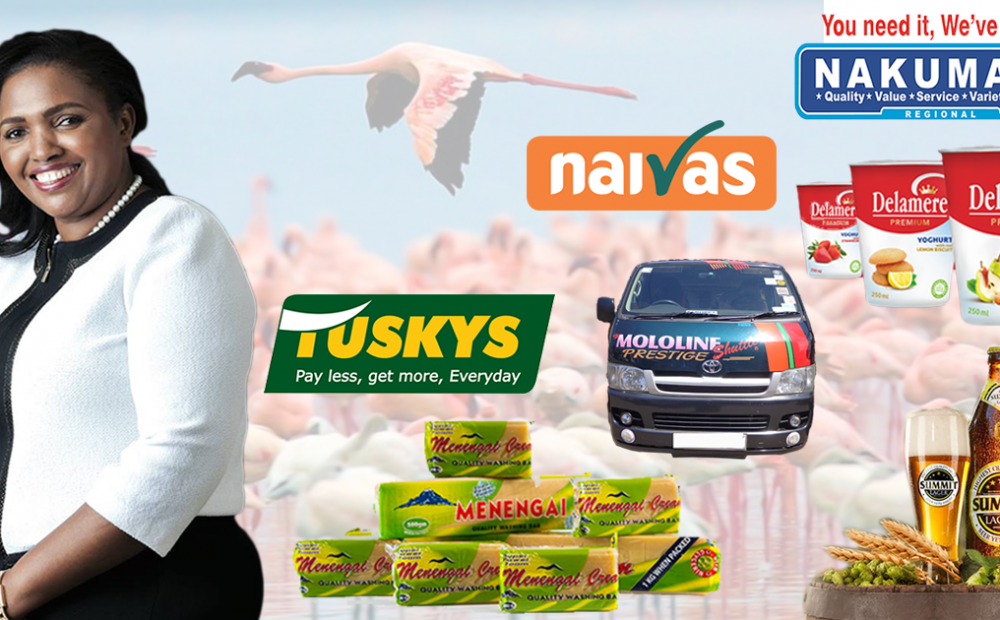 There is something peculiar about Nakuru and I am sure you’ve noticed it already if you’re really keen. No, I am not talking about flamingoes or the simmering Menengai crater.

For a long time, Nakuru has been silently acting as Kenya’s silent entrepreneurial boiler room. The Central Rift county has produced some of the best business empires in Kenya.

Talk of Nakumatt, Naivas, Mololine, Keroche Breweries, Menengai Oil, Comply, Delamere, Tuskys, Botto Solar, Gilanis…they all have one thing in common. They started off as small kiosks or farm-shops in the dusty town and grew exponentially to take over Kenya and East Africa at large.

A coincidence? No. We think there is more to Nakuru than meets the eye.

Located In The Middle of Everything

Nairobi acts as its good source for cheap supplies. A young man with a clothes stall in Shoppers Paradise in Nakuru can easily make a same-day trip to Eastleigh Nairobi to shop.

Likewise, he can easily transport the same clothes to North Rift – a market known for good tidings especially during crop harvesting seasons. Nyeri on the other hand provides a back-up market especially when the tea and coffee bonus season kicks in.

And don’t forget Nakuru is located right next to the Northern Corridor and Kenya-Uganda railway which are arguably Kenya’s aorta.

An entrepreneur with roots in Nakuru can therefore only be likened to a tree planted by the riverside. He can enjoy the benefits of both city and rural life at once.

Unlike neighboring Kisumu, Nyeri and Eldoret, the mention of Nakuru does not elicit tribal undertones. If you tell somebody today that you are from Kisumu, then he will most likely assume you are Luo.

Likewise, the mention of Nyeri alone is often interpreted to mean one is a Kikuyu. But what if you tell someone that you are from Nakuru town? Just like Nairobi, Nakuru has a Masai name yet its inhabitants are drawn from across the country.

This cosmopolitan nature means you can locate the headquarter of your company over here without worrying about limiting your fortunes to only one region of this country. Nakuru is as tribeless as Nairobi.

And that’s definitely a good thing especially if you want to expand your business across the country.

Related Read: What Does Kisumu Have To Offer For SMEs?

One challenge that Nakuru faces is that most large-scale businesses are headquartered in Nairobi and only operate branches in the smaller town. Even Nakumatt which was started in Nakuru in the 70s has its headquarters in Nairobi.

That fact alone means most of Nakuru’s native labour-force is absorbed by local SMEs. By SMEs we are talking about the likes of Ereto Bookshop, Autorec, Primesoft Solutions, Hotel Waterbuck, Tracom College and the likes.

One challenge with working for SMEs however is that you don’t have the luxury of sitting in some plush corner office all day surfing on Facebook and waiting for a salary.

You have to get out there, market the business, follow-up with stubborn debtors and even face it out with County Askaris. And you know what that does to you? It toughens you up.

A good number of these Nakuru SME employees eventually graduate to become employers. Not just employers but toughened hustlers who thoroughly whip their laid-back counterparts from other parts of the country.

It’s Cheaper to Operate in Nakuru than Nairobi

Nothing kills a small business faster than an unsustainable list of expenses. Nairobi is known for its punitive rent prices, goodwill and high-tech conmanship on street stall ownership. That’s not the case with Nakuru though.

Rent prices are much cheaper in the pink city than in the city under the sun. You can rent a stall with as little as Ksh5,000 per month as compared to Nairobi’s average of Ksh20,000.

County government rates are also favourable. You pay Ksh4,000 for a kiosk in Nakuru as compared to Nairobi’s Ksh15,000. And to top it up, while fare prices in Nairobi can skyrocket to as high as Ksh150 one way, most estates in Nakuru are within a walking distance.

Think of Shabab, Langa Langa, London and Kaptembwo all which are located within a 5 Kilometre radius of the CBD. This cheap cost of operation gives you an opportunity to operate your start-up in sand-box mode until you are ready to scale up.

Some people like joking about the perception that Coastal Kenya people are generally slow-paced. You can’t however peddle the same joke against Nakuruans.

The town, though not as fast-paced as Nairobi, is intensely competitive. This is probably because the many SMEs setting up in the area have to compete for the scarce opportunities available.

Only those who are quick enough live to see another day. And while the aggression of Nakuru people can be likened to that of their Kiambu brothers, Nakuru enjoys a slight advantage because of lower crime rates.

Nakuru has never been exposed to terror activities. And even during 2007 post election violence, the town itself managed to avoid the near-catastrophy violence witnessed in Naivasha, Eldoret and Kisumu towns.

To-date, the town is viewed by many as an oasis of safety at the backdrop of an otherwise volatile North Rift.

If you are the curious type you only need to take a trip in Nairobi’s downtown area or Mombasa’s Digo road and you will hear tales of aggressive Nakuru entrepreneurs who literary drove the locals out of business. It is no wonder some say Nakuruans are as aggressive Mount-Kenyans, as fast-paced Rift-Valleyians and as savvy as Nairobians.