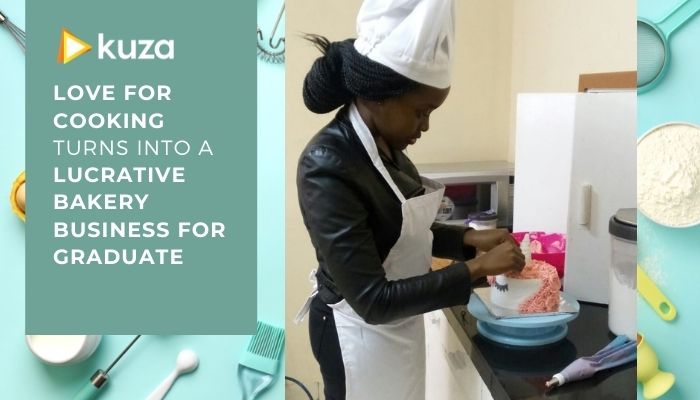 Turning what you love doing into a profitable venture can really be enjoyable given the excitement it comes with while operating it.

Sharon Sang is one such entrepreneur who has converted her cooking hobby into a bakery business which is now earning her some tidy sum of money.

The Bachelor of Commerce graduate from the University of Nairobi had learned how to bake cakes when she was a little girl from her mother and elder sisters.

And as she was waiting for her graduation in 2014, she realised she had some free time that she could utilise to earn her some pocket money.

“I did not want to continue asking for some cash from parents or siblings for my personal effects because I was through with my course and I could hustle as well,” said Sharon.

She, therefore, decided to spend Sh50,000 money she had won from a 2015 beauty competition where she became a runner-up to start off the business.

She used part of the money to buy baking equipment and the raw materials she had to start with.

Some of the equipment she bought include measuring cups and spoons, a weighing scale, baking tins, a blender, hand mixer, spatula, leveller, and mixing bowls, among other necessary items.

“My first product was a vanilla cake of two kilos which I sold to a friend at around Sh2,200 and that is how I got motivated,” said Sharon.

The more she continued baking good cakes and selling to people who were well known to her the more she got referrals until it reached a point her customers became her business ambassadors.

In addition, she invested in social media platforms such as Facebook, WhatsApp groups and Instagram to reach her usual and prospective clients.

Soon she started getting orders online which she could deliver in time earning her more trusts.

In 2018 she decided to register the business at a cost of Sh3,000 as Dessert Palace where she now bakes a variety of cakes such as wedding cakes, cupcakes, and birthday cakes among other pastries.

Since baked goods such as cakes are perishable and thus the need for the ready market so that they are sold when they are still fresh, Sharon prefers baking on order.

“I have learnt to execute the business skills I acquired from college very well and I am able to manage the business when I am faced with challenges.

Other than vanilla, Sharon also make banana cakes and carrot cakes and her prices depend on the size and the level of decoration brought about by food colouration if need be.

She also sells a packet of cupcakes comprising six pieces at Sh550.

“My main challenge is the many orders I get per week which when working alone I find it difficult to meet hence I am thinking of employing at least two people in the near future to help in baking,” said Sharon.