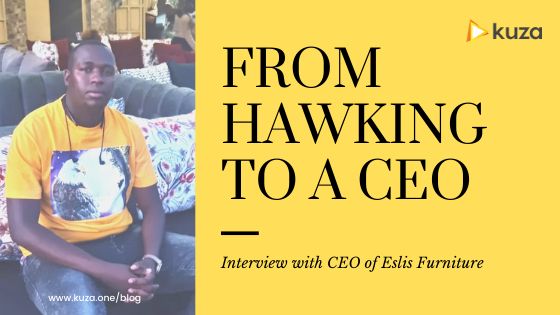 From Hawking to a CEO; Fred Mugo is Proof that Dreams are Valid.
What makes a living room homely? Is it the carpet, the entertainment system, the seats, the art on the wall or a combination of all these things? The CEO of Eslis Furniture will tell you a good comfortable seat is everything. It will make you look forward to going home at any time of the day and give you the confidence you need to host friends and family.

Fred Mugo started out selling clothes at Gikomba. Although it gave him the income he needed, he did not love it as much as he loves what he does today. Designing and making seats for sale. A business idea that he got from a friend who was also willing to hold his hand and show him the ropes. They started out as partners and worked together for a while. The young entrepreneur was determined to succeed so he gave it his all. After working together for some time he gained the confidence he thought he needed to start his own venture and so
they went their separate ways. 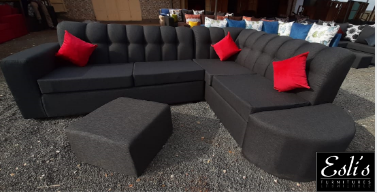 “Working with a partner was easier, you have someone to brainstorm your ideas with and help you in making difficult decisions. But I had to think about my future and I knew it would not be easy; I was ready to take on the challenge. Little did I know just how stressful it would get and that is how Eslis Furniture was born.”

When setting out there are so many things he had not considered. One of those things was the employees. He understands just how important a good carpenter can be for his kind of business. For a while he kept getting carpenters who did not understand his vision. Some would even go as far as getting drunk on the job. At some point he had to take a break, and travelled to Nakuru for some serious prayers.

“I had to commit to prayers for two days because things were getting so stressful for me. I am a believer and I know that prayers work because when I got back things started looking up. I got very good carpenters as well as tailors. You need employees who get your vision to succeed at your venture.”

Fred may be having employees but for the three years that he has been running his business he has been a hands-on entrepreneur. He goes to Gikomba himself to source for the raw materials he designs the seats and also works on social media to promote his hassle. He uses mostly Facebook and instagram as well as referrals. He says most of the people who show up at his workshop along Thika Road just a few kilometers from Roysambu do so because they have heard about the good product that they sell. He strives to offer the best, especially in the competitive market. He has to make sure he gives the best.

Things are looking good. He has achieved financial freedom doing something he loves. But the journey has not been without challenges and fears. One of the fears he grapples with is the fear of making seats and they don’t sell, what then? He has bills to pay regardless of whether he makes money or not. Although that rarely happens but as an entrepreneur it gets thinking of ways you can better yourself and your product.

When asked if he would get into employment he says No

“Being an entrepreneur is so fulfilling especially if you deal with something you are passionate about. I urge the youth to embrace entrepreneurship but they should know it is not that simple. It takes a lot of work, dedication and prayers if you believe in God.